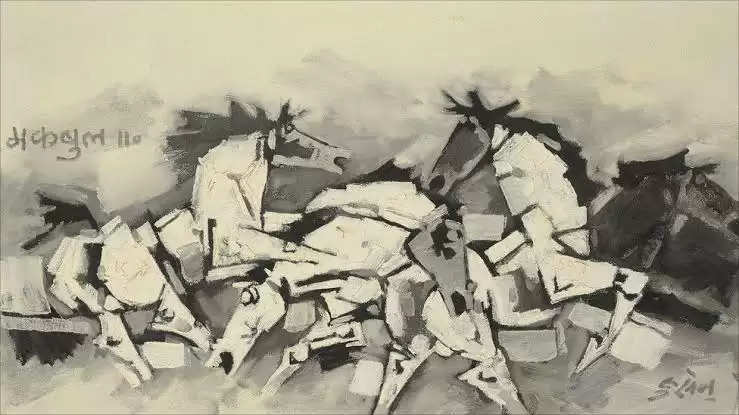 No form of communication is as effective as art when it comes to inspiring creativity. The use of visuals, the vividness of each element, and the capacity to engage the senses make art and the artists who create it a timeless and global phenomenon. India has had many renowned artists who have made some remarkable works. Here are twelve of the most well-known paintings made by these legendary artists which have stood the test of time.

Abanindranath Tagore's painting of Bharat Mata is one of the most renowned artworks in India, its image immediately becoming a representation of the whole Swadesi movement. The painting of a woman in saffron robes, clutching a book, paddy, clothing, and a rosary, symbolizes the India under British colonization, and its anticipation for liberation. This piece of art is not just a patriotic tribute, but also a symbolic representation of the potential of India.

The image created is that of a multi-armed Goddess, whose appearance holds a great deal of symbolism. The paddy symbolizes food, the piece of cloth stands for clothing, the book conveys the value of education and the rosary is a representation of salvation. The idea of a free and independent India, capable of taking care of its citizens, was presented by Tagore in his work of art that gave the nation a newfound respect, as a Goddess and most importantly, as the homeland.

Maqbool Fida Hussain is an extremely talented Indian artist whose name brings to mind excellence in the art world. He was very creative and had many sources of inspiration which often appeared in his art. His best known painting, Horses, is a powerful piece that shows his admiration of the strength and energy of the animals. It was auctioned in 2008 at Christie's and was sold for an impressive amount of over one crore rupees. The wildness of the horses is evident in the bold outlines and directly conveys Hussain's interest in their strength and freedom.

A 1931 self-portrait by Amrita Sher Gill, who has been celebrated by many as India's Frida Kahlo, is renowned as one of India's most famous paintings and displays her extraordinary skill with colors and brushes. Being very eminent amongst India's modern day artists, this painting provides a glimpse of the 18-year-old Amrita and the overpowering intensity of her gaze is accompanied by an air of sorrow. All of her immensely popular self-portraits show her various sentiments, from carefree and humorous to contemplative and disheartened, and often a combination of the two.

Jamini Roy, a very talented artist from Bengal and a pioneer of Indian modern art, was incredibly skilled in bringing to life his many unique and similar ideas. He was a student of Abanindranath Tagore, the founder of the Bengal School of Art, and his artwork embodied the Indian spirit, even though he had been trained in Western art. Roy's creative genius is evidenced in his memorable works, which he chose to focus on Indian culture, despite his Western training.

Three Pujarins is one of the most renowned works of the artist, embodying Indian culture in each brushstroke. Drawing inspiration from the folk art of Bengal, the painting is rich with vivid colors, a trademark of the artist's work even when the use of colors was limited. The painting portrays three priestesses in a devotional pose, carrying a strong symbolic meaning. The blues and the black outlines give the painting a captivating appearance, along with the Bengali-style sarees in indigo, as a reference to the Indigo movement against the British government. Three Pujarins is thus a powerful piece of art beyond its vibrant colors.

Raja Ravi Verma's epic painting Shakuntala is an oil on canvas work that symbolizes the emotion of love that is present in the story of Shakuntala and Dushyant. The painting depicts Shakuntala pretending to remove a thorn from her foot, however in reality she is taking a glance at her prince, Dushyant, displaying the joy of being young and in love. This artwork has its own beauty with no suggestive elements and without any figurative representation.

There are only a few masterpieces and artists that manage to leave a lasting impression without any allegory, and Shakuntala is one of them. Verma perfectly captures the universal emotion of love in this painting with the body language of its subject, Shakuntala. It speaks volumes to its viewers with its vivid depictions of love and its realistic movements. This is testament to Raja Ravi Verma's brilliance in conveying so much with static gestures.

6. Days of Glory by Satish Gujral

Satish Gujral, an exemplary painter whose body of work heavily draws from the tragic experiences of Partition, portrays the immense suffering it caused in his renowned painting called "Days of Glory." Surprisingly, this painting is reflective of the tumultuous times of violence, and its creator believes it is a representation of his anguish instead of the Partition. This artwork symbolizes helplessness but with a sense of honor. It is a representation of a painful event that brought people together in a confined space, showing a chapter so moving yet dreadful that solidarity was the only solution.

Krishna (Spring in Kullu) is a shining example of artistic expression and creativity that has cemented its place amongst the most renowned paintings in India. This work of art, produced in 1930 by Russian artist Nicholas Roerich, reveals his spirituality and is acknowledged by the ASI as one of nine national art treasures. Roerich found solace through his Buddhist practices, gaining an appreciation for the beauty he found in Kullu, both in the environment and in himself. The painting portrays Krishna serenely playing a flute with a blossoming tree in the foreground and a magnificent snow-capped mountain in the background.

The complexity of Nicholas's artwork can be seen in his portrayal of the branches moving in the breeze, but it can also be interpreted as something more metaphorical than what is immediately obvious. Krishna could be an artistic representation of human nature, rather than simply a celebration of the deity. More importantly, it highlights the spiritual development of the artist through his clever use of light and shade.

Tyeb Mehta, a towering figure in Indian art and possibly India's best contemporary artist, created the iconic Mahishasura. Several versions of the painting have fetched millions in international auctions. Mehta successfully depicted the story of the Goddess Durga's victory over a demon in a simple yet meaningful way using form, color, and line. His modern work, based on ancient imagery, may be open to interpretation and lack clear lines, but there is no question about his brilliance and the relevance of his artwork within India.

It is only fitting that a self-portrait by the remarkable Rabindranath Tagore is part of the most famous paintings in India considering the amount of wisdom he had and the many roles he filled with brilliance. What makes his inclusion even more remarkable is the fact that he only started painting in 1928 at the age of 63. This is a testament to his genius that he still managed to create stunning works of art at a time when many consider themselves too old. This is what makes his art so popular, as it is universally appreciated for its striking yet understandable portrayals.

Syed Haider Raza's iconic artwork is a major part of Indian painting. According to Raza, the bindu is a source of power and vitality, and is represented by abstract shapes and symbols. This point of origin is what made Raza an icon, and it began and ended with this focal point. In addition, Raza also explored themes such as the tribhuj, which is rooted in geometry, as well as nature, which is a result and reflection of the abstract.