Govinda Naam Mera is the most anticipated movie by Vicky Kaushal, Kiara Advani, and Bhumi Padnekar. Seeing all three stars in completely different  avatars has doubled the excitement of fans to watch the film. A few days ago, the trailer of the movie was released and created a lot of hype on social media. Makers released the teaser of the song ‘Bijli ‘ two days ago. The song features stunning Kiara Advani and Vicky Kaushal in a completely energetic avatar. Their electrifying performance of Vicky and Kiara will surely make you groove with them. 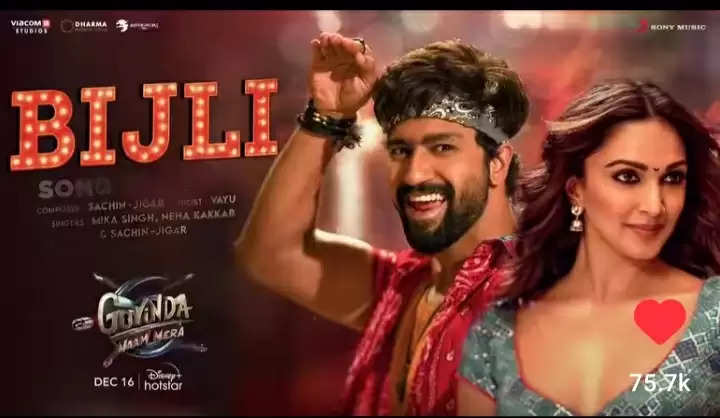 The song is energetic and peppy and will surely make one of the most loved party anthems of this year. Kiara is looking gorgeous in the song and her look is quite similar to Katrina Kaif’s look in the song ‘Chikni Chameli’. She has been decked up in a beautiful bright green and red outfit in the song while Vicky is wearing a yellow T-shirt and red shirt with a green bandana tied around his head. The song is choreographed by famous Choreographer Ganesh Acharya. Vicky has played the role of a choreographer in the movie and has flaunted the dance movies so gracefully and energetically. This party song is composed by Sachin-Jigar and written by Vayu. Sachin -Jigar along with Mika Singh and Neha Kakkar has sung the song.

Govinda Naam Mera is directed by Shashank Khaitan and jointly produced by Karan Johar and Viacom18 Studios. Vicky is playing the role of a choreographer in the film, and Kiara Advani and Bhumi Padnekar are the female leads of the movie. The stellar supporting star cast of the film includes Sayaji Shinde, Renuka Sahane, Amay Wagah, Dayanand Shetty, and others. The film is all set to release on the OTT platform, Disney+ Hotstar on December 16, 2022.