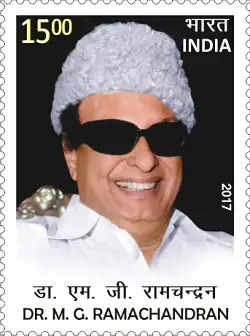 Maruthur Gopalan Ramachandran was an Indian politician, actor, philanthropist, and filmmaker who served as Chief Minister of Tamil Nadu from 1977 until his death in 1987. He founded the AIADMK and was J. Jayalalithaa's mentor. M.G.R. was posthumously awarded the Bharat Ratna, India's highest civilian honour, on March 19, 1988.

He was born in Melakkath Gopalan Menon, a Palakkad Mannadiyar Nair, and Maruthur Satyabhama, a Vadavannur Vellalar from Palakkad, in the modern-day state of Kerala in Kandy, British Ceylon. His sister died from illness not long after his father died. His mother had to struggle on her own to raise M.G.R. and his brother. She decided to return to India and went back to Kerala. Satyabhama enrolled both of her sons in school with the help of Velu Nair of Kumbakonam.

M.G.R. began his acting career in school, when he joined the Boys Company drama troupe, where he participated in the troupe's rigorous training programmes in the areas of singing, dancing, sword fighting, diction, and memory with active interest and involvement.

M.G.R. made his film debut in 1936, in the film Sathi Leelavathi, directed by American-born film director Ellis R. Dungan. M.G.R., who usually appeared in romance or action films, made his breakthrough in the 1950 film written by M. Karunanidhi. With the 1954 film Malaikkallan, he quickly rose to prominence. He played the hero in the Tamil film industry's first full-length Gevacolor film, Alibabavum 40 Thirudargalum, released in 1955. In 1972, he won the National Film Award for Best Actor for his performance in Rickshawkaran.

M.G.R. joined the Dravida Munnetra Kazhagam (DMK), or Dravidian Progressive Federation, in 1953, after being drawn in by its founder, C. N. Annadurai. In 1962, M.G.R. was elected to the State Legislative Council. He was first elected to the Tamil Nadu Legislative Assembly at the age of 50 in 1967. M.G.R. became treasurer of the DMK after the death of his mentor, Annadurai, in 1969, after Muthuvel Karunanidhi became Chief Minister.

Here are some interesting facts about MG Ramachandran: