Nora Fatehi recorded her  statement under section 50 of the PMLA, 2002 in September and October 2021, where she mentioned of receiving Gucci Bag and iPhone By Leena Paulose (Sukesh Chandrasekhar’s wife) 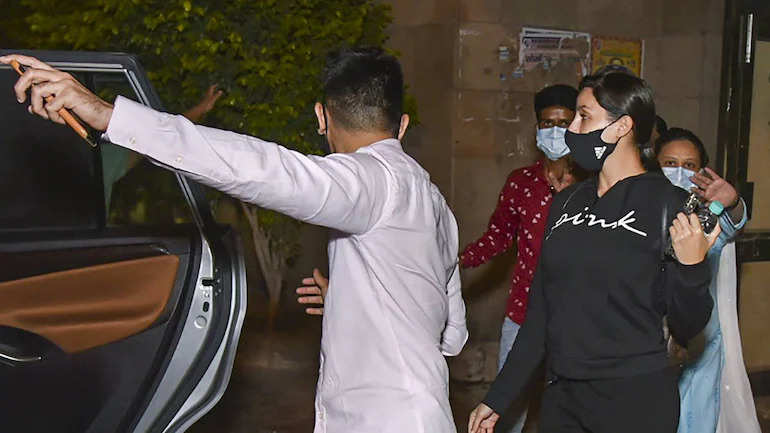 The famous Bollywood actress Jacqueline Fernandez was charged by the Enforcement Directorate in Sukesh Chandrasekhar’s money laundering case. The investigating officials questioned Nora Fatehi about  her involvement in the case.

The actress was examined by the Delhi Police EOW (Economic Offences Wing) on Friday, asking her about her connection with imprison conman Sukesh Chandrashekhar's money laundering case. However, the details of this investigation are yet to expect.

As per ETimes report, Nora’s statement was recorded under  Section 50 of the PMLA (Prevention of Money Laundering Act), 2002 in September and October 2021. She had mentioned that she has been booked  for a charity event and during the same time, she was gifted a Gucci Bag and an iPhone by Leena Paulose, wife of Sukesh Chandrasekhar.

Recently, Nora was noticed checking out for a meeting in the city as per her latest outing, but it has not being well received by some netizens who brutally trolled her due to her walk. In fact, some extreme trolls also make fun of Nora for reportedly using the swanky car which is gifted by conman Sukesh Chandrashekhar.  Meanwhile, Jacqueline Fernandez on the other hand has been making it to the headlines for all the incorrect reasons. Also several reports propound that Sukesh Chandrasekhar was communicating the actress from inside of Tihar jail.

In fact, Fernandez profess that she was not aware of Sukesh calling or texting her from the jail.

Recently, Jacqueline Fernandez, in a plea before the Appellate Authority of PMLA, express that it was really shocking that other celebrities like Norah Fatehi, who was also cheated by  accused Conman Sukesh Chandrashekhar in the ₹200 crore money laundering case, was made a witness in the case.

As per the supplementary charge sheet put in by the ED alleged, "The inquiry conducted so far has disclose that the accused, Jacqueline Fernandez, is directly or indirectly is involved in the activity connected with the proceeds of crime and received, owned and used part proceeds of crime by way of receiving many valuable gifts and huge amounts of money not only for herself but also for her family members in India and abroad and thereby executed an offence of money laundering under section 3 of the (PMLA) Prevention of Money Laundering Act, 2002.”