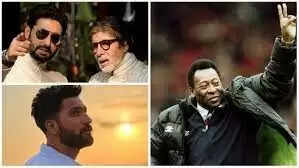 Pele (Edson Arantes do Nascimento), a Brazilian football legend, has died. He died on Thursday, at the age of 82, following a battle with cancer. Pele is the only player in history to have won three World Cups and is regarded as one of the greatest football players of all time. As word of his death spread, a flood of condolences poured in from all over social media. Brazil's government declared three days of mourning for the King of Football. Vicky Kaushal, Anupam Kher, Kareena Kapoor Khan, Abhishek Bachchan, and many other Bollywood celebrities paid tribute to the Brazilian icon via social media posts.

He also stated that he obtained Pele's autographed jersey a few years ago and that it is one of his prized possessions. "A few years ago, while visiting India, I somehow managed to get an autographed jersey of his," Abhishek wrote. It is prominently displayed in my office. Sir, thank you for teaching us about joga bonito and for being a hero and idol to billions. "Rest in Peace, Greatest!"

Pele's death has been mourned by Kareena Kapoor Khan, Vicky Kaushal, and other Bollywood celebrities.
Kareena Kapoor Khan posted an old photo of Pele to her Instagram stories with the caption "King," while Vicky Kaushal posted a black and white photo with the caption "RIP." Shilpa Shetty added, "Legend #Pele "May you rest in peace." AR Rahman paid tribute to the legendary footballer with a music video tribute titled 'Ginga,' which he composed for the film 'Pele: Birth of a Legend' in 2016. "Rest in peace legend #pele," he tweeted. This song is dedicated to "honouring your legacy." The biographical film focused on Pele's childhood and his journey with Brazil to win the 1958 FIFA World Cup.

Rest in peace legend 🌺🌹🤲🏼🙏#pele I dedicate this song …honouring your legacy https://t.co/vOTIf1BJQy

"I join the rest of the world in mourning for the Football Legend Pele," Ajay Devgn wrote in a heartfelt tribute. He was synonymous with the sport that continues to captivate the world. May the Legend's soul rest in peace. Your name will be mentioned wherever football is played."

Anupam Kher shared pictures of the football legend, and called him a 'game changer'. "Dearest Pele!" he tweeted. You and your game, as well as the way you played it, will forever be a #GameChanger for millions of people all over the world. Whether they were football players or not. Thank you for living an inspiring life. #OmShanti #Pele #RipLegend."

Twitterati also dug up a specific scene from Hrishikesh Mukherjee's Golmaal that mentions Pele. Throughout his career, Pele was dubbed "The Black Pearl," "The King of Football," and "The King" (O Rei). Utpal Dutt was interviewing Amol Palekar for a job in Golmaal when he asked him about 'black pearl' or Pele. Pele's first trip to India was in 1977, when he was playing for the New York Cosmos. Pele faced Mohun Bagan in an exhibition match at Eden Gardens in Kolkata.

Pele died on Thursday in a hospital in Sao Paulo. He was suffering from kidney disease and colon cancer. He was reportedly receiving therapy, but he stopped responding to medical procedures and was transferred to palliative care. On Thursday, shortly after Pele's death, his daughter Kely Cristina Nascimento posted on Instagram. Pele's hand was held by several sets of hands in the image. She thanked her father and expressed her love in her caption. "Everything we are is because of you. We adore you infinity. "Rest in peace," read the Instagram translation.

Rest in peace legend 🌺🌹🤲🏼🙏#pele I dedicate this song …honouring your legacy https://t.co/vOTIf1BJQy