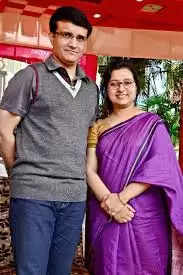 Sourav Ganguly also called Dada, is an Indian cricket administrator, commentator, former national cricket team captain, and the 39th and current president of the Board of Control for Cricket in India (BCCI). He is married to Dona Roy or Dona Ganguly. Let’s know some facts about DONA GANGULY.