When Amitabh Bachchan publicly shouted at Jaya Bachchan because of Rekha.
By varsha jain Mon, 7 Nov 2022 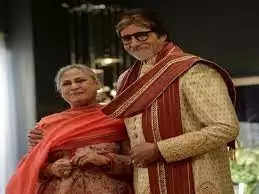 Bollywood is an integral part of the life of the people in the our country and everyone is always to eager to know about the gossip of the Celebrities of B-town wether it be about affairs between stars or any other sort of masala stories.
So, how can one miss a story about the Shenshah of the film Industry 'Amitabh Bachchan'.
Talks about the affairs between 'Amitabh Bachchan and Rekha' have been in limelight for a few decades now.
It is believed that after the film Do Anjaane in 1976, Amitabh Bachchan and Rekha’s onscreen chemistry which was much-loved by the audience. Reportedly, their romance blossomed in real life as well. But nobody ever accepted it on a public platform. Despite the fact that Amitabh Bachchan was married to Jaya In 1973. While we often hear about Jaya losing her calm over things, once it was Amitabh Bachchan who yelled over her.
Journalist Karan Thapar in his book Devils Advocate - The Inside Story has recalled the incident in a very elaborate manner. Once when Karan was interviewing Amitabh and Jaya together he questioned Big-B about his alleged affairs and relationship with his co-stars to which, he replied saying, "No. I too have read such stories they're not true. But I can't stop magazines writing this sort of stuff." After which he asked Jaya about wether she believed in him and she replied saying that "I always believe my husband."

After the interview Amitabh Bachchan invited the journalist for a lunch where Jaya offered some rice to her husband. Out of nowhere, Big B yelled at Jaya, "You know I never eat rice. Why are you offering me something I never have?" Jaya tried to explain that she offered him rice because the rotis were still being made. But Amitabh was still enraged. "I don't want rice! I never have rice and you know that. I'm not complaining that the rotis haven't come, but stop offering me rice instead. I've said I don't want rice and I'm happy to wait for the rotis. Can't you understand that? What's the matter with you? Why can't you just listen to what I'm saying?" he said that 'Jaya left the room and never returned. Shortly afterwards the rotis appeared and Amitabh started eating. The rest of us, however, had no appetite left,' the journalist concluded.