Top 10 Contemporary Painters Of India In 2023 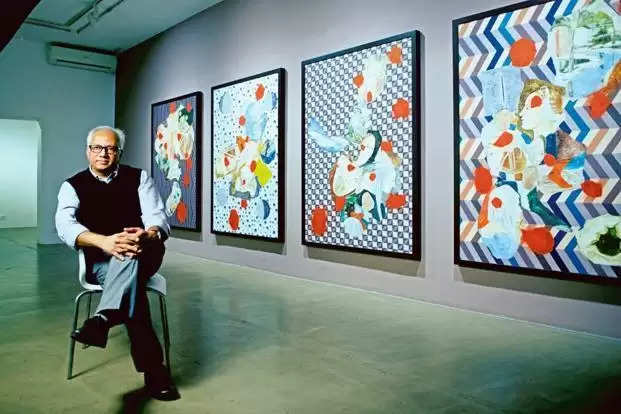 The subject of "Indian art" has been widely discussed around the world. While traditional artistic expressions often featured tales of great rulers and their conquests, modern Indian art has taken a more unique direction. Now, Indian art does not merely seek to please the eyes of the viewer, but rather conveys a narrative about the changes in society, such as colonization, division, women's rights, and more. As a result, it can be difficult for an onlooker to understand the complexities of Indian art, which is why it is so admired by many intellectuals.

In this article, we will explore the works of 10 of the most renowned Indian painters.

Zarina Hashmi is an acclaimed contemporary Indian painter who has a passion for paper. She hopes to capture a sense of familiarity with her monochromatic painting medium. Her artworks are characterized by beautiful sculptures decorated with gold flakes. Before she was an artist, Zarina studied mathematics. Her remarkable drawings have gained her recognition as one of the few female Indian artists of her time who use warmth and beauty to evoke a sense of home. Her art is composed of muted colors, geometric shapes, and bold lines. Her works were even showcased in India's first-ever national pavilion at the 54th Venice Biennale in 2011.

Atul Dodiya is one of the most well-known modern painters in India. He is highly popular and some of his works are worth up to Rs. 3.5 Crores. For example, his painting 'Lodging in Somnath' was sold for Rs. 3.3 Crores in 2017. He usually paints based on the political ideologies of India, which attracts many art collectors from around the world. His art is often sold in auctions for large amounts of money.

Sheela Godwa is a woman who is strongly rooted in her beliefs. She believes art can be found in everything, and her paintings reflect the events of everyday life and the nuances of human nature. Her pieces include a variety of ordinary occurrences, and are constructed out of items found in urban areas. Reports suggest she has used cow dung, charms made with human hair, tar drums, incense, and many other commonly used materials to make true-to-life sculptures and works of art. One of her most famous works is Behold (2009), which was created with knotted rope suspended by plaits of human hair hanging from car bumpers.

Bharti Kher is a renowned contemporary artist from India, born in London and moving to New Delhi to hone her skills. Her artwork mainly consists of elements from nature and animals and is complemented by Indian bindi for a touch of femininity. Her pieces are highly sought-after, with many of them fetching millions of dollars through auctions.

When talking about modern Indian art, Nikhil Chopra's presence can't be overlooked. This contemporary artist resides at the Metropolitan Museum of Art and creates thought-provoking drawings which depict India's current state. His artwork depicts collective history, autobiography, and nostalgia, along with symbols and scenery. Additionally, his charcoal drawings of animated characters are so genuine that viewers are attracted to them. He originally comes from Kolkata but creates his work in Goa!

Jitish Kallat is an acclaimed contemporary Indian artist who has gained renown for his captivating multi-faceted paintings. He usually portrays the vibrancy of Mumbai, including its social and political elements, and its imperfect beauty. Many of his works focus on the struggles of the working class in the city. His art is passionate and powerful, leading it to be sold at high prices at auctions; for instance, one of his pieces was sold for an impressive £55,000 (Rs. 55 Lakhs).

Shilpa Gupta, located in Mumbai, is a distinguished modern painter renowned for expressing distinct interpretations of humanity through her artwork. She has gained an understanding of many personalities and uses sound, drawings and performance to bring them to life. Her artistic creations have the intention of stimulating the viewer's intellect and providing them with wisdom. Through her art, she desires to affect the hearts of many societies in India.

Raqib Shaw was a relatively unknown painter, who became famous at the age of 33 due to his works, which were auctioned off for an incredible 20 Crores in 2007, earning him the title of one of the priciest Indian artists. Despite his lack of recognition outside London, Shaw's remarkable artworks garnered him international acclaim due to his keen eye for detail. His painting process involves multiple stages, beginning with paper, then to a panel, followed by a stained glass liner, and lastly, glitters and crystals to add extra grandeur. His works are primarily inspired by literature, poetry and mythology.

Sahej Rahal is one of the freshest faces in the world of Indian art, and is renowned for being the recipient of the Forbes India Art Award in 2014. His works are renowned for their mystifying feel, being composed of painting, films, sculptures, and performances that involve upcycled furniture, clay, digital elements, and everyday objects. His art is inspired by Japanese anime, pagan rituals, and Indian myths and legends, making it truly captivating.

Subodh Gupta, who is married to Bharti Kher, is an internationally acclaimed contemporary Indian artist recognised for his unique paintings and artworks. He largely concentrates on sculptures and oil paintings, which have fetched him substantial sums at auctions. For instance, the worth of his art is estimated to be between 70 Lakhs to 10 Crores. His distinct style of abstract art has made him a popular figure among modern art enthusiasts across the world. Therefore, the top 10 contemporary Indian painters have made India proud with their artistic expressions in the form of colours and shades. Consider viewing some of their best works when you can to treat your eyes!