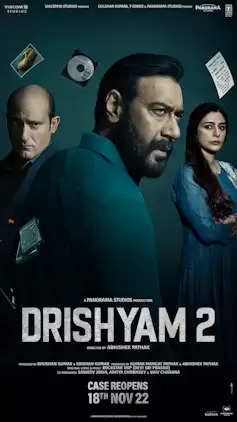 Ajay Devgn led thriller drama, Drishyam 2, opened quite well as it clocked roughly Rs. 14-15 crore at the Indian box office on day one. It has a possibility to be the second highest opener among Hindi films this year if the figures come in higher than expected, placing it only behind Brahmastra. It is an outstanding achievement for a thriller genre movie, a genre having limited appeal in India. The opening of the film was aided by the brand established by the first part of Drishyam, as well as a strong satellite and digital presence. The filmmakers banked on the film's nostalgia effect, which was used as the base for their marketing campaign too.

Drishyam 2's advances are quite strong for day 2, and the picture may potentially earn approximately Rs. 20 crore nett on its second day. The performance on the Mumbai circuit has been outstanding, while the performance on the other circuits has been good. It should be noted that the picture achieves such figures despite the absence of hit songs and a high production value. Drishyam 2's strong opening day box office result on a non-holiday has really made the trade confident about the future of Bollywood's mid-budget films, and one would expect that Bhediya only consolidates it more. It should be noted that the film is doing well worldwide as well, which is not often the case with Ajay Devgn films. The film's debut and trend indicate that it may gross more than $5 million internationally in its entirety.

Drishyam 2's opening and advance trend has also refuted the misconception that remake films do not succeed in Bollywood, since this film may be among the top Bollywood grossers this year. The film industry has had a difficult year, with just a few films prospering theatrically. The post-Covid dynamics may have shifted, but the launch of Drishyam 2 is quite comforting for the trade.