Top 10 Scariest Movies Based On Wild Animals Ever Till 2022 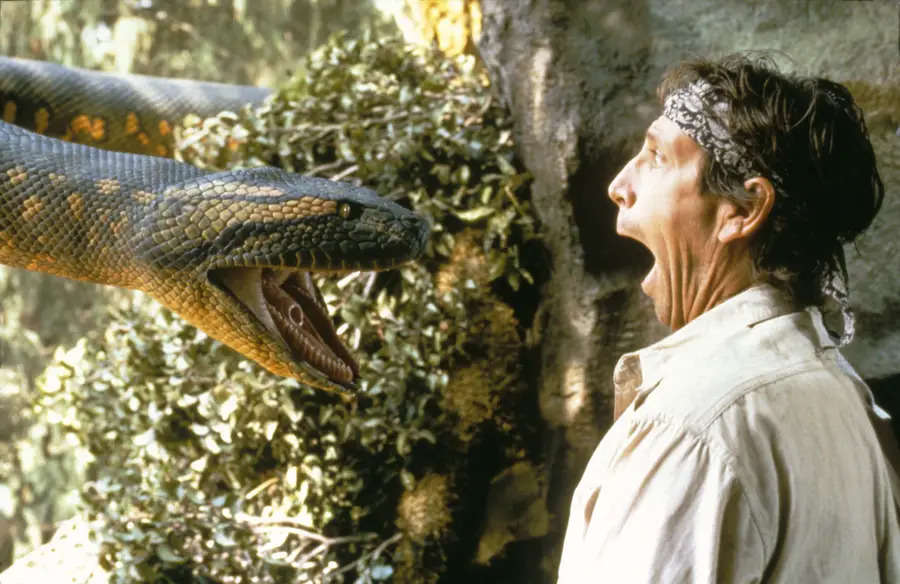 Grizzly was largely seen as a copy of the successful film Jaws, which was released in 1975. The fear-inducing premise of a giant beast is similar to the one in Spielberg's movie and it works because bears are genuinely intimidating. The story follows a group of park rangers as they try to deal with the increasingly violent attacks of a huge bear. The sight of the destruction caused by the beast is enough to keep anyone away from nature. Although the movie was successful enough to have a sequel released 44 years later, Grizzly II.

People enjoy Anaconda for its cheesy B movie plot featuring a huge serpent, as well as its comedic elements, special effects, and the fun of watching a giant snake take on a bunch of people who are completely unprepared for the battle.

Liam Neeson provides a gruff touch to his character in The Grey, a movie about a plane crash victim who struggles to survive in the Alaskan wild with a vicious wolf pack chasing him. This film brings out a feeling of despair for the human characters, who must face the harshness of their reality. Roger Ebert, a well-known movie reviewer, was so moved by The Grey that he left another movie screening and went home. The story of this movie will leave viewers wanting to hide under their blankets.

This Australian horror story, inspired by Jaws, has its own unique charm. Creative cinematography, effective sound effects, and unexpected plot developments make the giant razorback boar a believable and thrilling menace. Despite some uneven acting and inconsistencies in tone, fans of creature movies will find much to enjoy in this film.

Lewis Teague successfully avoids the potentially ridiculous implications of a movie centred around a killer dog while adapting Stephen King's tale about a rabid killer dog. Instead, the movie serves as a depressing reminder of the terrible effects of rabies, and there is no joy to be had in witnessing the titular dog tear into human flesh. It appears that the ability for extreme violence exists in both humans and their greatest buddy. Even after more than 30 years, Cujo is still receiving special re-releases as a cult favourite.

The prehistoric piranhas quickly eliminate anyone who tries to take them out. The movie is a wild and hilarious rollercoaster ride that is as enjoyable as it sounds. The atmosphere and style make sure to present these ideas in a humorous way, never taking itself too seriously, which contributes to its success. Piranha 3D is even crazier and more improbable than Sharknado in terms of the drama and comedy surrounding wild animals.

7. Snakes on a Plane

Samuel L Jackson's excellent portrayal of his character in Snakes on a Plane elevated the movie and its seemingly ridiculous plot to something more. The story is uncomplicated yet frightening, and it resonated with many people. The strangeness of seeing people being attacked by unexpected snakes was made even better by the internet phenomena that it sparked off: YouTube spoofs, fan-made films, fanfiction, and so on.

In Alfred Hitchock's film The Birds, he dramatizes a real-life incident that happened in 1960: birds behaving erratically and attacking both cars and people in a California town. Starting out as a love story, the significance of birds, first connected to love blossoming, turns into something more ambiguous as the birds start to attack and even kill people. This will surely be relatable to viewers agitated at that one seagull at the beach that believes it is entitled to their food.

There have been so many discussions and analysis of Steven Spielburg's iconic shark movie that it could fill an entire library. It had such an impact that it is even being adapted into a musical . Every aspect of the movie was remarkable, from its ability to evoke a sense of paranoia, John Williams' iconic soundtrack, and the talented actors who successfully demonstrated the mayhem that befell a coastal town.

Although not a typical animal film, many people recall the epic battle between Leonardo Dicaprio and a computer-animated bear which was heavily advertised. When Dicaprio eventually won an Oscar for the role, the internet was abuzz. The film follows Hugh Glass, a trapper in the Dakota wilderness during the 19th century, surviving life-threatening situations while getting caught up in disputes between settlers, indigenous people, and the forces of nature. Directed by Alejandro Gonzalez Iñarritu, The Revenant won 3 Oscars for its stunning, captivating, and realistic portrayal of human beings and their environment. This movie will keep people away from the woods for quite some time.